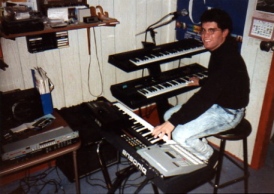 It dawned on me recently that this year (most likely, back in February) marked the 25th anniversary of my first purchase of a professional synthesizer…an Ensoniq ESQ-1 workstation (the image accompanying this post was taken around 1989 and includes the ESQ-1 and some later purchases: an Ensoniq Mirage sampling keyboard, a Roland U-20 synth, a Kawai Q-80 sequencer and an Alesis HR-16 drum machine).

The track below is a very rough recording of a song that was one of the first things I created using the sounds and sequencing capability of the ESQ-1…so the sound quality is poor and the song is pretty terrible. It just represents a trip down memory lane…when I thought music would be my life and I wanted to be the next Howard Jones.

By the way, I still have the ESQ-1 and all the other equipment, too…PLUS, an Alesis QS6.1 synth that I bought about eight years ago and is my main keyboard these days. However, the ESQ-1 has been dormant since it needs a new lithium battery installed. I found a place in northern New Jersey that does this for about $90, but I haven’t gotten around to it yet. I would really love to see that thing come to life again, though.

Ran 10.04 miles with Nike⁠ Run Club...well...that run sucked. Had absolutely nothing today. And I was not ready for the heat and humidity yet. Oh well. #running #training #NikePlus
At this time 10 years ago today, Alison and I were asleep at the @mykonosadonishotel on our honeymoon. It was already the early hours of May 30 there. Eight hours behind us in Chicago, Game 1 of the NHL Stanley Cup Finals between the Flyers and Blackhawks was just getting underway. Meanwhile, Roy Halladay was on the mound for a struggling Phillies team (shut out five times while going 2-9 from the night of our wedding until we returned from Greece on June 3) in Miami, where it was 7 hours behind us in Mykonos. I wound up waking up around 6 a.m. on May 30 — or 11 p.m. on May 29 on the U.S. east coast. I reached for my phone to check the Flyers score (they lost, but I found that out later). Instead, I see a text saying “PERFECTO!” I blurt out rather loudly, “WHAT THE FUCK!” Alison wakes up and asks, “What’s wrong?” And I said, “I think Roy Halladay threw a perfect game.” She asked, “Did you really need to scream?” I remember being a bit puzzled as I answered, “YES!” Back then, the only Internet provided by the hotel was via Ethernet and by the hour (or multiple-hour blocks). I threw on some clothes and ran to the front desk and asked for more Internet like a junkie. I seem to recall getting some kind of deal on the Internet since we were checking out later in the day. I raced back to the room, fired up my MacBook...and this is how I experienced Roy Halladay’s perfect game vs. the Marlins. #mykonos #phillies #royhalladay #doc #perfectgame #honeymoon #10yearanniversary
5/29/2020: On this day 10 years ago, we spent our honeymoon taking a boat to tour the sacred mythological birthplace of Apollo and Artemis, the mostly uninhabited island of Delos (just a dozen or so archeologists and workers live there). The first photo shows Mount Kynthos and some of the ruins, including the Temple of Isis (at center, near the top of the mountain, which is more like a big hill). Despite the warnings of vipers along the trail to the summit, we made the hike up to the top. You can kind of make it out in the photo, but from around the Temple of Isis to the top, the path becomes a stone staircase. After spending a day surrounded by history, we returned to our hotel for our last night in Mykonos. Little did I know that more history would be made nearly 6,000 miles away in Miami, Fla., as I slept that night. #Delos #Mykonos #Greece #honeymoon #10yearanniversary