An update on my herniated disc/leg issues, a recap of my performance in the inaugural Crest Best Run Fest 10-Miler, and some other odds and ends. Read on for the details… END_OF_DOCUMENT_TOKEN_TO_BE_REPLACED

So…what’s happened since the first edition of this newsletter went out last month? A lot…and nothing. I was in the hospital…that was something. Unfortunately, the reason for the hospital visit kept me from competing in the Hightstown Triathlon I was so looking forward to. And it’s led to a lot of doing nothing. Read on for the details… END_OF_DOCUMENT_TOKEN_TO_BE_REPLACED

So…since Facebook is a trash fire platform run by a trash fire of a human being, I deleted my old account back in June (and Twitter is hanging on by a thread). I do still have a profile there through a secondary account I set up years ago in an aborted attempt to use that one to manage my podcast pages. But it basically exists solely to interact with other pages that handle things like sign-ups and notifications only through Facebook. I don’t plan to return to posting there at all.

Therefore, I have returned to posting here and on my long-dormant Tumblr account for sharing links, musings and other things, like weather updates. So feel free to check that out every now and then to see what I’m up to.

This has been a weird year for me. I don’t usually do too many races during the spring and summer months. But for the past few years, I’ve taken part in Philly’s 10-mile Broad Street Run in May and a 5K held at my alma mater, Rider University, in June.

This year, however, I wasn’t able to run Broad Street because of an all-day, all-hands-on-deck work commitment — even though my job was eliminated through a reorganization about a month later (yeah…more on that later). And the Rider University 5K didn’t happen either.

Even worse, my favorite annual race, the Trenton Half-Marathon — a race I’d done every year since 2014 (after doing the event’s 10K component in 2013) — that was supposed to take place in late October or early November was canceled earlier this year.

Basically, I haven’t taken part in an organized race since last November’s Philadelphia Marathon. Now, I have been training (running, cycling and swimming) for a good chunk of the past nine months, but it just seems odd not having any events to prepare for during that time.

But now, the events I have been training for are suddenly just weeks away. First up, is the Hightstown (N.J.) Triathlon on September 9. I’ve done this sprint triathlon every year since 2014 (it was my first triathlon) because it takes place about 20 minutes away from where we live.

Next is the inaugural Crest Best 10-Miler in Wildwood Crest, N.J., on October 7. This new race is presented by the awesome Wildwood-based DelMo Sports (who oversee a bunch of events in South Jersey, including the Atlantic City Triathlon I did in 2014…and hope to do again next year) and I’m really looking forward to it. Unfortunately, that conflicts with yet another race I usually do, but won’t be able to do this year — WXPN’s Musicians on Call 5K.

Cough Wars: The Recycling Strikes Back

Of course, with all these races now within a few turns of the calendar, I seriously messed up by back a couple of weeks ago. Not during training, of course. But by being taken by surprise by a violent coughing attack as I was bending awkwardly to pick up a piece of wayward recycling while taking it out to the curb one morning.

Ugh! I have never been in so much pain in my life (and that includes slamming my shoulder into the back of a Chevy Suburban during a bike ride in 1986). What’s not helping is that I’ve been trying to train through it. In fact, a few hours after it happened, I went out for a triathlon brick training session that included an 11-mile bike ride and a planned 5K-distance run that I had to cut back to a mile because I just couldn’t handle the pain. Shortly after that, I drove out to a local swim school to do a little more than a half-mile in the pool.

The next day I tried to go out for a 5-mile run, but struggled just to get through four.

Even worse is that it has led to an apparently related leg issue that crops up when I’m sitting. It seems when I put pressure on my left lower back/butt, it leads to pain in my thigh.

I’m mostly OK when I’m standing, though. I even managed to get through my first 10-mile run since January a few days ago. The only thing that’s really bothering me on my runs right now is the lingering cough that sneaks up on me.

So, yeah, training has not been ideal for the past two weeks. Hoping things are better by this weekend.

So, as I alluded to earlier, I’m no longer working at George Street Playhouse. I was let go in early June as part of a reorganization that eliminated my position. They are in the process of streamlining operations ahead of the move into the New Brunswick Performing Arts Center next summer. Honestly, I had been trying to find something closer to home anyway. Despite how it ended, I’ll have mostly great memories of my four seasons there.

The big news is that we’ll be going on a Disney Cruise while school is out in early November. I have never been on a cruise before and not sure what to expect. It will be the first time on a plane (our cruise originates from Port Canaveral) with our boys, as well. That’s kind of making us a bit nervous, especially since Benjamin doesn’t like to be contained for long periods of time. Hopefully, we can work it out so that he’s sleepy for both the departing and return flights. But the vacation is a gift and we are very grateful for it. Our boys will definitely enjoy it.

Although nothing much became of the musical aspirations I had as a teenager, this year does mark the 30th anniversary of what I consider the first real song I ever wrote, “Time Takes Over.” I recently documented the full story behind the song, and added vocals and some other light instrumentation to the original instrumental demo I recorded to cassette back in October 1988, which you can listen to here:

I’ve also dipped my foot back in the songwriter’s pool recently with some creations I consider “sketches” to use in possible future works. The most recent of these was something I did completely in GarageBand on my iPhone and is more or less a complete song, from a structure standpoint. I’ve been listening to The War on Drugs a bit recently and I’ve become rather obsessed with how their songs really don’t do much structurally, but tend to stick to a groove and just build/add or subtract elements to create atmospheric ebb and flow patterns. Here’s an untitled project I recently recorded using this approach. Again, this was more of an experiment in structure, so the patterns and melodies here are essentially placeholders…but I still kind of like it as a starting point.

I haven’t been to many concerts this year. Alison and I saw my favorite current band, Lo Moon, in March. I had seen them in November 2017 on my own and then saw them again at WXPN’s XPoNential Music Festival in late July, so I’ve already seen them three times. I really love their sound…lead singer/band leader Matt Lowell is very much influenced by the greatly under-appreciated Mark Hollis of Talk Talk. Matt is also a huge fan of The War on Drugs (with a couple of members of that band appearing on Lo Moon’s self-titled debut album) so that’s why I have become a little more interested in TWOD recently.

Also, keep your eyes and ears open for emerging soul/R&B singer-songwriter Devon Gilfillian. He played the Marina Stage on Day 3 of this year’s XPoNential Music Festival, just before Lo Moon were to hit the River Stage. I didn’t plan to watch his set, but I went over to take some photos (which came out terrible). And it wound up taking a lot of effort on my part to tear myself away to get over in time for a good spot for Lo Moon. Devon was far and away my vote for biggest surprise of the entire festival — and he’s also caught the attention of Rolling Stone. Great band, great performer, great set. The Philly-area native who now calls Nashville home has one EP out and is working on his first full-length album in Los Angeles. Here he is performing his latest song, “Troublemaker,” at the XPoNential Music Festival:

In June, I had the awesome and rare opportunity to catch music legend Midge Ure (Ultravox, Rich Kids, Visage, Slik, Thin Lizzy and — nearly — Sex Pistols) perform an intimate acoustic set in the tiny room at Randy Now’s Man Cave in Bordentown, N.J. You might not know the name, but Midge Ure has been Bob Geldof’s right-hand man with all matters associated with Band Aid and Live Aid over the decades. In fact, Midge wrote and produced “Do They Know It’s Christmas?” (Geldof gave him a snippet of a discarded Boomtown Rats song at the beginning of the writing process, but has said in at least one interview years later that it’s really Midge’s song) — a song with which he’s had a love-hate relationship over the years, but he seems to have come around to embracing it more recently. Here’s the first part of an amazing documentary, narrated by Midge, about the making of that historic record.

I will be seeing Simple Minds at The Basie in Red Bank, N.J., in late September, which is going to be incredibly awesome.

Anyway, here are photos of me with Midge Ure and Lo Moon to close out this update. 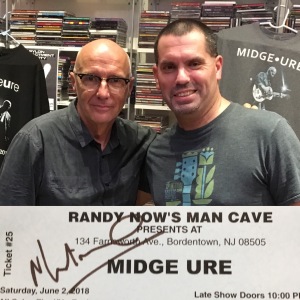 Looking forward to making my CBP debut in this Kyle Schwarber shirsey Thursday…a birthday gift from my sister-in-law, @amy.lit
Last day for me at the beach as a 50-year old; last day for Graham in single digits #Brigantine #NJ #beach
Fourth of July in Brigantine.
This is blowing my mind…somehow, I had no idea until this morning that prog supergroup Asia’s self-titled debut album was the No. 1 album in the U.S. for all of 1982 — a year widely believed to be one of the best ever for pop/rock music? Love the album and obviously knew it was a hit, but No. 1?! This was the year Madonna released her debut album. It was MTV’s first full year on air. And, yes, the biggest selling album of all time, Michael Jackson’s Thriller, was released — but not until November 30 so it didn’t have time to even make the top 5 for 1982.
Well, last night’s @garbage and @tearsforfearsmusic show at PNC Bank Arts Center was an all-timer for me. Both bands sounded amazing. I had only seen Garbage once before and that was in the early 2000s, so it was fun to see them again after all that time. I think this was at least my fifth time seeing TFF since 2004/05, and this was hands down the best I’ve ever seen or heard them. And it was Curt Smith’s birthday! “Woman in Chains” just hit different last night after the horrific action taken by the fascists of the Supreme Court. I was looking forward to seeing Carina Round with TFF, but she had to leave the tour to hit the road with her main band, Puscifer. But her absence allowed me to experience the force of nature that is Lauren Evans.
In a ridiculously long and winding security line, but we made it to PNC Bank Arts Center for @garbage and @tearsforfearsmusic!
Loading Comments...