Just wanted to end 2017 with a quick look back at my running achievements during the past year.

My most important running milestones in 2017, of course, were running in the first two marathons of my life — first, the New Jersey Marathon on April 30 and, then, the Philadelphia Marathon on November 19.

Although I was thrilled to finish my first 26.2-mile race, I was generally disappointed in my marathon debut at the Jersey Shore.

On top of that disappointment, I had to prepare for the 10-mile Broad Street Run the following weekend. Two days after the New Jersey Marathon, I went for a 5-mile workday run during lunch and began experiencing excruciating pain in my right knee at about mile 3. I stretched it out a bit and was able to continue, but it kept on happening during my runs that week.

I tried to doing some things to mitigate the knee issue (ice, stretching, massaging, etc.) and had to resign myself to the fact that I may — for the first time — be unable to finish a race. 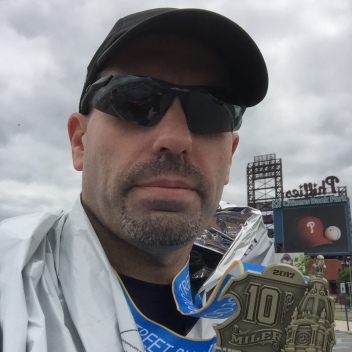 But — wearing a knee brace not at all suited for running (because it was all I had at the time) — and fighting through some discomfort the final five miles, I wound up finishing the Broad Street Run in a personal-record 1:27:03.

After the Broad Street Run, I took a three-week break from running to get my knee right again. I would have taken more time off, but had to tune up for a 5K held at my alma mater, Rider University, each June to benefit women’s athletics. Even with my knee issues and the heat that day, I managed to complete that in a respectable 25:02.24.

The next race I did was one that I wasn’t sure I would do until about a month before the event, and that was the Hightstown (N.J.) Triathlon, a sprint-distance tri held each year not too far from where I live. Amazingly, even though I didn’t do any open-water swim training and squeezed in only two or three training rides on the bike, I still finished 76th overall in the event with a personal-best time of 1:21:21. Somehow, despite the 1/4-mile swim and 11.2-mile bike ride preceding it, I ran what was likely one of my top-10 5K times to set that PR with a time of 25:49 during the run portion.

At that point, I turned my attention to training for the Philadelphia Marathon, with the lone exception being one last short race — the WXPN Musicians On Call 5K in early October. Even though the course may have been short by a bit, I finished that race in 23:39.69 — and then got to stay for the ever-popular post-race 80s dance party!

Then it was back to the Philly Marathon. Sadly, I was only able to get in two really long-distance training runs — a 16-miler and an 18-miler — leading up to the race. But I had done a lot of pacing work on my shorter runs and felt ready to vindicate myself from the disappointing marathon debut in April. I just wanted to finish in less than five hours.

And despite wet, brisk conditions and ridiculous, swirling 40+ mph wind gusts, I managed to do just that, finishing in 4:51:22.

So that was my year in running. Oddly, except for the Hightstown Triathlon (the event I made a last-minute decision to do each of the last two years), I don’t have any events lined up yet for 2018. But I’ll be running somewhere. Just trying to figure out what races to do.

Sucks to see another iconic NJ music venue close, but it’s the end for Long Branch, NJ’s venerable Brighton Bar. Went to a few shows there and played there a couple of times in @christian_beach’s backing band. Here’s a video still from a performance of David Bowie’s “Five Years” that we did there in 2008. Look up “Christian Beach Five Years” on YouTube and you’ll find it, as well as the live studio version we did for a Bowie tribute album. #BrightonBar #NJ #livemusic
Happy Opening Day! Two years ago, I took my older son to CBP. We were supposed to go again last year. This year, we’re all in quarantine after a possible exposure at my younger son’s school. And I have some minor, cold-like symptoms. We all got tested yesterday, so hopefully we’ll get results in the next couple of days. In the meantime, #GeauxPhils and #RingTheBell
Been working on refining mixes and re-recording some vocals on some of my more recent songs for a “secret” project.
Just wanted to get in an easy 10K-distance run to get miles back under my feet. A big positive is that I felt stronger as the run went on. I think my legs are finally starting to remember how to do this. #running #strava
Apparently, I joined Twitter on this date in 2007, just days after its coming out party at that year’s SXSW. @lemasney had me sign up and mentioned it for the first time on our old Technology and the Arts podcast at around the 4:20 (!!!) mark of only our eighth episode, released April 4, 2007. Amazingly enough, that same episode of our “hobby” podcast featured an interview with legendary producer, engineer (Hendrix, Bowie, Beatles, Stones & many others) AND photographer Eddie Kramer...an unbelievable and ridiculously fortuitous get for our little show. I’ll put a link to it in my bio for today.
Wow...don’t remember writing this and there are some instances of some subpar writing/editing due to inexperience and likely tiredness from consecutive all-nighters, but the overall theme of my column in the Oct. 11, 1996, edition of @theridernews has certainly come to fruition...traditional media focusing on trivial nonsense just to compete with the emerging junk news and misinformation outlets popping up online...with the conclusion that the Web may not be so great, after all. Less than 25 years later, all of this led to an attempt to overturn an election and an insurrection at the Capitol. Also, I am truly sorry for the awful O.J.-Princess Di joke. That was someone in college trying to make a point about their respective pop culture statuses; not about pairing a humanitarian with a double-murderer...ugh...the cringe-factor here is at a Bret Stephens level of column-writing. Anyway, by going for shock value, I was guilty of the same thing I was writing about, which absolutely sucks.
Loading Comments...
Comment
×
%d bloggers like this: