Welp…so much for the year and the decade being off to a good start, as I stated at the top of the last update. Less than a month later, we are living in the midst of a global disaster thanks to the novel coronavirus pandemic.
END_OF_DOCUMENT_TOKEN_TO_BE_REPLACED

Jason Thompson, a senior out of Rider University, was selected by the Sacramento Kings last night with the 12th overall pick of the 2008 NBA Draft. Projected to go later in the first round, Thompson’s stock rose to the point where he was taken as a lottery pick by the Kings.

Geoff Petrie, the Kings’ president of basketball operations, on selecting Thompson with the No. 12 pick…

We had considered a small at 12, but as the draft went on, we felt the best place to go was to go big. He was the number one pick at 12 for us if we were going to go big. He is a 20 (point) and 12 (rebound) guy and there was only one other guy like that, and that was (Michael) Beasley. He gives us another young forward that I think will compliment the rest of the people we have such as Spencer (Hawes).

When we first met him he was 6’2’’ in high school or maybe even junior high and was playing point guard. He said ‘but I have these big feet’ so when he got to college he was around 6’4” and then grew to 6’10”. Again, when you see him make plays he really runs well and is really comfortable when he makes plays with the ball. I think that some of that is because he got an early start playing a position that was more of a size for his body at that time.

It is such a gradual process as you work through all of the different players that work into all of the other information and reports you have on people. At some point you have to make a choice. I think we made a good one.

He is a more mature kid and his game is more developed. It is part of our process of trying to rebuild our front line, plus we have other areas we need to work on too, but we can’t do that with just one player, unless Magic Johnson just so happened to be there at number 12, but he wasn’t.

Kudos to the Kings for taking Jason at No. 12…and for their web site staff for putting the following splash page up just minutes after the team made the selection (click image to enlarge): 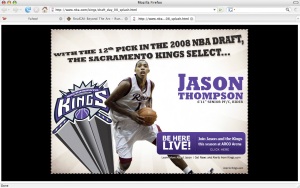 Well, it’s not the NCAA Tournament, or even the NIT…but the Rider men’s basketball team (23-10, RPI #110) will get a chance to play at least one more game when the Broncs visit Old Dominion on Tuesday night in the first round of the inaugural College Basketball Invitational tournament.

I’m not sure if this CBI tournament is going to last beyond this year. Any tournament that has teams declining home games because of money issues and then invites Cincinnati (13-18) to play has some real issues. But it’s giving Jason Thompson and Rider a chance to keep playing, which they deserve.

Jason Thompson scored 32 points — reaching the 2,000-point mark for his career in the process — and grabbed 18 rebounds in leading No. 2 seed Rider to a thrilling 76-71 come-from-behind victory over sixth-seeded Marist in Sunday’s semifinal round of the Metro Atlantic Athletic Conference Tournament in Albany, N.Y.

The Broncs (23-9) advanced to face top seed Siena in Monday night’s championship game. Rider will be making its second appearance in the MAAC title game, with the previous trip resulting in a loss to Niagara in 2005. A win would put the Broncs in the NCAA Tournament since back-t0-back appearances in 1993 and ’94, when they were members of the Northeast Conference.

Finally went on a run…first in a long time and first of 2022. Everything hurt, but glad I got it done. #running #strava
Went ice skating with Graham today…left without injury, and that’s about the best result there is when it comes to me and ice skating.
First-half Eagles (left) vs. second-half Eagles. #FlyEaglesFly
Happy Holidays!
A fantastic @wxpnfm Free At Noon set today from @the_mavericks …those seeing them at the Keswick tonight and tomorrow are in for a treat
Alison and I are at @worldcafelive for today’s sold-out @wxpnfm Free At Noon with @the_mavericks
Loading Comments...